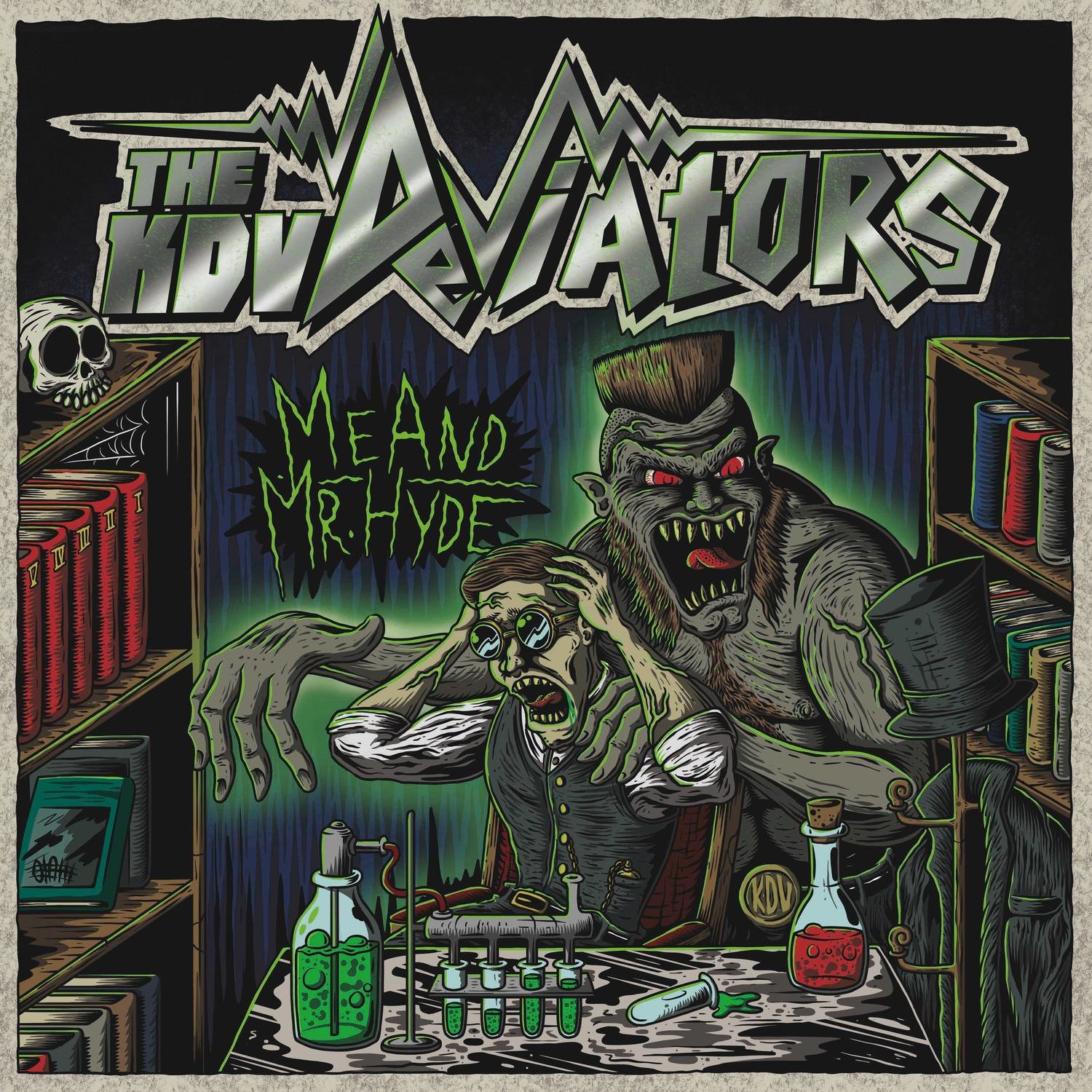 GET THE 3 COLOURS TO GET THE SPECIAL DEAL !

No! Really? Yes! THE KDV DEVIATORS release four new tracks on their 7‘‘ „Me and Mr. Hyde” (Just For Fun Productions), limited to 666 hand numbered copies (222 Green Olive , 222 Blood Red & 222 Silver) and released on 5th of March. As the “Lost Contact!” album (Drunkabilly) by Koefte de Ville’s project really blew me away I was thrilled to find out that there will be a new release by this band that could have been called a MAD SIN side project if it had not always had the potential to be much more. Now the line up features Koefte on vocals and drums accompanied by the two MOONSHINE STALKERS and GUITAR SLINGERS Bruno Malo (bass) and Andy Kandil (guitar). That sounds thrilling.

„Koefte got in touch with me last year and asked me if I wanted to jump on bass for KDV”, Bruno says. „Also he asked me if I knew a guitarist that would be interested. I suggested Andy. The reason behind the line-up changes were because Koefte wanted to keep THE KDV DEVIATORS separate from MAD SIN Obviously, everything changed at the end of Last year and Andy joined MAD SIN, due to Ramon’s sudden leave. Currently I am in charge of the KDV-bookings, and we will be booking gigs towards the year.” This means we might witness more intense live activities by this three piece in the future, which sounds promising. For now, we got the new tracks that show that the album wasn’t a mayfly. With “Dark Skies” we are beamed back into the shady B-Movie universe of psycho primary rock Koefte and his companions and we suddenly recognize that there’s a new vibe in space. More twang, more swing, some rattlesnake sounds and some seductive backing vocals that would bring a smile to Barbarellas face to say the least. That’s sounding more balanced and less raw, but powerful. The guitar lick that opens the song is classic, The catchiness might not be pure psycho, but it is pure heaven and who care’s, as long as it is music reserved for those who are still looking for real music and a honest attitude in times of growing enfeeblement.

„Deviant“ continues with a furious guitar-pattern and snare drum rolls that kick us head over heels into a great track that puts on the tempo and aggression without missing some melodic and somehow elegant guitar-soloing and a killer chorus. Well, if you like it catchy, the best is yet to come: “Me And Mr. Hyde” starts with a damn cool organ theme that sets the mood for a fine piece of musical horror that would fit well with the record collection of Herman Munster. Who knows? Maybe it was him doing the handclap sounds in the chorus?

On the musical side there’s some special goodies hidden within this psycho smash hit: After the first chorus, the smooth rockin’ instrumental part leads into a short double-time-attack followed by a break and another short rhythmical variation. It’s details like this that show the great musicianship of the three peace, while „The Source” (once again after “Psyclops Man” from the debut) shows the enthusiasm for TORMENT – this time with a cover version, that mixes the KDV style with elements like the dominant beat of the original and some guitar reminiscences to Simon Brand that are integrated in Andy’s Performance. With three minutes this is the longest tune in the 7’’ which means the whole visit in Mr. Hydes laboratory is over to soon, which is not that much of a problem, as the songs can be heard again and again without getting boring. The sound is less old school compared to the last release, less purist, but completely convincing. So all in all this record is a next step that won’t leave those who liked the debut disappointed

B2: The Source (Torment Cover)