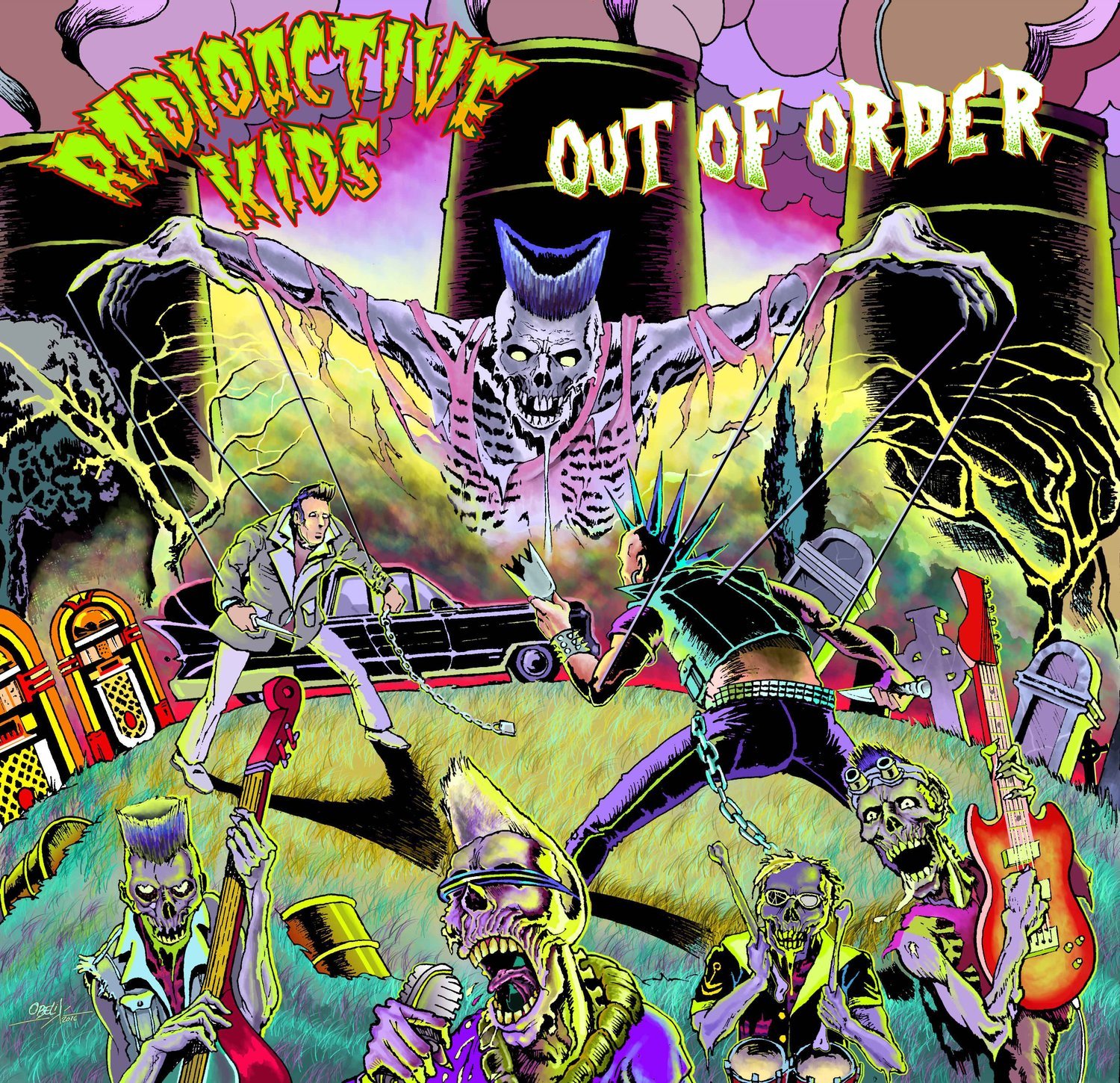 Now that’s what I call a band history: In the 80s, four kids from Alicante in Spain started playing rockabilly in the countryside near their hometown. Then a nuclear test by NATO units changed everything and it became necessary to bring the guys to the local psychiatric ward. Is it an urban legend or the naked truth about the origins of the RADIOACTIVE KIDS? I am not sure… “Out Of Order”, the title track of their current 7’’, released on Just For Fun Productions is so weird, that I tend to believe at least half of the narrative. If you are looking for the safety of a song with verses that rhyme and a rhythm that tells your feet where to go, this one will drive you insane with its kind of stop and go madness. “Lost, lost I’m wandering around in a sea of darkness. I’m losing control” These lyrics hit the nail on the head, concerning the mood of this spooky and deranged first song on the limited vinyl (500 hand-numbered copies were made) in splattered green. Damn cool? Sure. And I did not even tell you, that the inner sleeve contains two short comic strips that illustrate the songs “Out Of Order” and “Dr Mabuse” and contain lyrics that are not exactly the stuff worthy citizens would love to read.

If you are not puzzled yet, the band surprises you with “Inspector Gadget”, an instrumental that’s actually the theme of the Inspector Gadget series, played in a kind of 80s-psycho style and also spiced with some breaks and even slightly changes in pace. It sounds fine, but handcrafted, including some nice guitar effects produced I a good old-fashioned way by using the volume control button of the instrument. “Dr. Mabuse” opens the B-Side with a slappin’ bass and drums-intro and turns out to be a dark psycho-track that doesn’t deal with the super villain Dr. Mabuse but with the abusive part of religion, specifically Catholicism. Following the pattern of the A-side I expected “Rock’n’Roll-guitar” to be another nice instrumental. But the RADIOACTIVE KIDS remained unculculable. Actually, this is a cool rockin’ psycho-party-number. Twist, laugh, wreck, have a beer. This is pure fun and quite far away from the strangeness of “Out Of Order”, which makes this four-track collection very diversified till the end.

Starting with the artwork that quotes the design of the bandcamp release from 2013 when they also played the Psychobilly Earthquake at Bremen, and is done again by Obelix HellArt to the musical performance, this 7’’ is something special. If you share the opinion, that one cool thing about psychobilly is freedom of moral and musical dogma; this release is good fodder for you. The RADIOACTIVE KIDS came up with Spaghetti Western elements or a cover of JOY DIVISIONs “Love Will Tear Us Apart” as well as THE SMITHS “There Is A Light That Never Goes Out” in the past. They maintained the ability to surprise – not by including anything modern into their old school sound, but by re-interpreting it with individual ideas. I’m not sure, whether the band is still an insider tip. I recommend them at any rate. Unfortunately, I lost the commercial clip, when I had to escape a psychotic killer… Just trust me and order your copy!